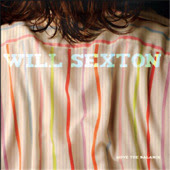 Singer/songwriter Will Sexton re-released his 2010 album “Move The Balance” on November 15. After the recording of this album back in 2009, Will suffered a stroke. During his recovery process, the album was released without much notice. Now, almost fully recovered, Will is touring to promote the album’s new re-release.

The album begins with the title track, “Move The Balance,” which gives the listener an invitation to lay-back and relax while listening to this great acoustic, folk-rock album. Highlights include the Ryan Adams’ sounding “Sunday Driver” and the country infused “For Always.” Will gives us a bit of the blues on “Best Intentions” before continuing with the country-pop sounds of “Amnesia Lights” and “Little Late For Loving Me Now.” The album closes with the wonderful storytelling of “Happy Hour” as Will show’s off his songwriting talents.

Will has written and worked with a number of musicians ranging from country legend Waylon Jennings to psychedelic pioneer Roky Erikson to punk rocker Johnny Thunders. Will was also involved in the New Folk Underground with David Baerwald and has written for MCA and A&M Records. Will Sexton has a handful of dates in the Texas/New Mexico area running into December. Please visit Will’s website (willsexton.com) for a complete list of tour dates and album information.
Posted by JP's Music Blog