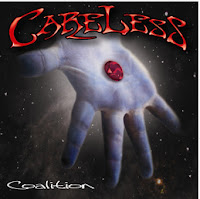 If you missed out when the "New Wave of British Heavy Metal" invaded US shores in the late 70s, then here is your chance to experience it with the new release from Careless. The band first started out in the early 80's as fans of Rush and Iron Maiden. The band began writing songs of their own with the same feel as some of these British Heavy Metal bands and started recording them on home recording gear. As the 80's went on, Careless disbanded, until 2008 when founding member Walt Kosar searched the internet to get his band back together. They decided to re-record songs from that early demo along with some brand-new originals which is what makes up their self-released album "Coalition."

The album begins with the three songs from that early recording ("Curtains," "Boundaries," and "D.F.M."). You can instantly hear their love and passion for the "New Wave of British Heavy Metal" as the vocals, guitars and drums follow that blueprint. Of the new songs written on this album, the ones that stand out are "The Gods Themselves" and the more modern sounding "Contend In Vein." Also scattered throughout the album are newly recorded instrumentals.

For more information on Careless and to hear a sample of the album, please visit carelesscentral.com.
Posted by JP's Music Blog