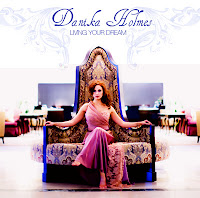 Singer/songwriter Danika Holmes just released her second album entitled “Living Your Dream” which is exactly what she’s doing. An Iowa native, Danika received positive reviews on her debut album “Second Changes” and released her first music video for the single “Lock Me In Tonight.” Now she returns with more experience and the right formula for writing a great pop song.

Her album begins with the country-folk sounds of “Dreams Held Hostage” and the wonderfully gentle storytelling of “Bluebird.” The bluesy feeling of “Rainy Day Lovin’” shows Danika broadening her sound as she also adds some jazz to “Someone New To Forget.” Danika’s pop songwriting shines on “Kiss And Makeup,” while her talents soar on the title song, “Living Your Dream.” The album closes with a fitting cover of Bob Dylan’s “Forever Young.”

Danika Holmes is beginning the New Year off with a bunch of shows in Iowa before heading out on the road in March. Please visit her website (danikaholmes.com) for tour dates and information on the new album.
Posted by JP's Music Blog