CD Review: The Dead Milkmen Return With "The King In Yellow" 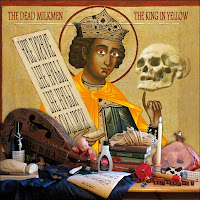 Formed in 1983, The Dead Milkmen began as an underground punk rock band, performing in the Philadelphia area. Then, in 1988, they hit it big with their single “Punk Rock Girl” and their album “Beelzebubba” broke into the top 200 Billboard Album chart. Now after a fifteen year hiatus, The Dead Milkmen return with a new album entitled “The King In Yellow.”

The album begins with that familiar alternative, punk sound that only The Dead Milkmen are known for, the quick drumbeat and simple guitar strumming wrapped around storied lyrics. The band shows a harder edge on “Fauxhemia,” then add some eighties rock to “She’s Affected,” but it’s the “Meaningless Upbeat Happy Song” where we find the band’s comedic lyrics in full-force. Most of the songs on the new album average about two minutes, but that is all that’s needed for The Dead Milkmen to get their point across as in “Some Young Guy” and “Quality of Death.” The Dead Milkmen seem to be having fun performing again as it shows in the punk song “Commodify Your Dissent” and the ska-sounding “Can’t Relax.” The album closes with “Solvents (For Home and Industry)” as the band’s sound flashes back to the early eighties when alternative music was still underground before bands like R.E.M. made it mainstream.

The Dead Milkmen have one show scheduled on December 10 in Philadelphia and their new album is available now through the band’s website (deadmilkmen.com).
Posted by JP's Music Blog