CD Review: The Dogs Divine Show Us The "Size Of The Fight" 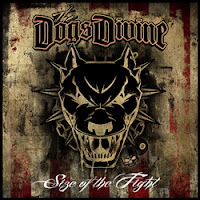 Chicago record label Mortal Music released phe newest album from hard rockers The Dogs Divine back in November entitled "Size Of The Fight." It is the band's sophomore outing and a definite improvement over the band's debut album.

The Dogs Divine come roaring out of the gate with the fist-pumping, head-banding sound of "Dogs," which is the band's battle cry. The energy this band puts into their songs is felt instantaneously in the songs "Overnight Sensation" and "FDLF." Vocalist Tom Hart sounds like Kid Rock in "One and Only" before the band tackles Queen's "I'm In Love With My Car" with mixed results. The gentle acoustic instrumental "Gussie" is a nice break from their hard rock attack before closing the album with the storied lyrics of "One For The Ages."

The Dogs Divine performed a couple of shows in the Illinois area at the beginning of December, but look for more dates to be announced soon. Check out the band's myspace page (myspace.com/thedogsdivine) for more information.
Posted by JP's Music Blog