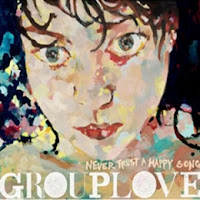 The album begins with “Itchin’ On A Photograph,” an up-tempo, acoustic, folk rocker that easily portrays the passion this band has for performing. The song “Colours” carries that same vibe and has been featured in the video games “Madden NFL 12” and Fifa 12.” The band has fun with “Tongue Tied” that sound like a throwback to the pop, alternative sound of the eighties. While the band’s slower songs seem to drag, it's their upbeat, get on your feet songs like “Spun” and “Chloe” that make this album fun to listen to. Their heartfelt acoustic ballad “Cruel and Beautiful World” and the closing song “Close Your Eyes and Count To Ten” show-off the true songwriting talents this band has to offer.

Grouplove have recently shared the stage with Florence and the Machine and will be heading to Australia at the beginning of 2012 for their own headlining tour. Check out the band’s website (grouplovemusic.com) for song samples from the new album, as well as tour dates and a live session performed at Spin magazine studios.
Posted by JP's Music Blog