CD Review: "It's Likely" For The McCauliffe Brothers Band To Find Success 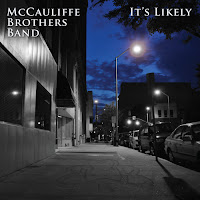 The McCauliffe Brothers Band, from North Carolina, released their debut album entitled “It’s Likely” this past summer. The band does a great job combining their laid-back, jam-band sound with the mellow vocals of guitarist Chris McCauliffe. The rest of the trio is made up of Chris’ brother Mike on bass and Lehman Best on drums.

While you hear the potential this band has in the opener “Easier,” they don’t find their groove until the Red Hot Chili Peppers-sounding “Might As Well.” The song “As It Was” sounds like a 90’s style alternative rocker, while “Locked Away” has a strong chorus surrounded by a heavy bass line. The McCauliffe Brothers Band save the best for last on their 7-minute, slow-building epic song, “It’s Likely,” which really shows off the band’s talents. Chris McCauliffe’s guitar solo about 4 minutes into the song is a must hear.

The McCauliffe Brothers Band is currently in the studio working on songs for their follow-up album. Check out their website, mcbrosmusic.com for more information.
Posted by JP's Music Blog