CD Review: James Parenti Reflects On "Why We Lost" 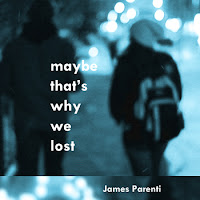 The album begins with the acoustic, subtleness of "Your Frame." Parenti's voice blends in with the music so well that the lyrics hardly matter. The addition of Trish Phelps on vocals help flesh-out Parenti's vocals giving the lyrics a bit more of an impact on "Don't Feed The Animals" and "Winter." The overall appeal of the album is the relaxed way Parenti delivers his vocals, especially on "Rachel" and "Clear Eyes."

James Parenti's new album "Maybe That's Why We Lost" was released on December 12 and was celebrated with a release party at Brooklyn's Goodbye Blue Moon. For more information on James Parenti, please visit his myspace page (myspace.com/jamesparenti).
Posted by JP's Music Blog