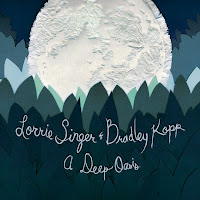 From Texas, comes the duo of Lorrie Singer and Bradley Kopp with a new album entitled “A Deep Oasis.” Bradley Kopp is known as one of the hot, go-to lead guitar players in the Austin, TX area. He’s performed with the likes of Alejandro Escovedo, Charlie Robinson, and Jimmie Dale Gilmore just to name a few. Lorrie Singer sang back-up with musicians like John Denver and Tracy Nelson. After a brief meeting in the late-seventies, the two reunited over a decade ago and released their second album this past summer on Koppertunes Redboot Records.

The album begins with the acoustic-based “Radio Car” that quickly displays the chemistry between Singer and Kopp as the two trade vocals before coming together in the chorus. The album features guest musicians like Glenn Fukunaga (Dixie Chicks), Paul Pearcy (Jimmie Dale Gilmore), Phil Bass (Monte Montgomery), David Webb (Mason Dixon), Michael Wooten (Carole King) and Grammy-winner Joel Guzman. Their southern, laid-back country sound comes shinning through in “Cowgirl Souvenir” and “The Savage Ways Of Man.” The album contains 9 original songs along with 4 covers. Originals like “Eye Of A Needle” and “Uncle Ben’s House” give us a glimpse of Kopp’s guitar skills, while “The Easy Part” highlights Singers wonderful vocals. The best of the cover songs is the album closer “Breakfast In Bed” which has Singer and Kopp coming together to perform this folk classic.

The duo has three shows scheduled for the beginning of 2012 in the Austin, TX area. For more information, please check out their website singerandkopp.com.
Posted by JP's Music Blog