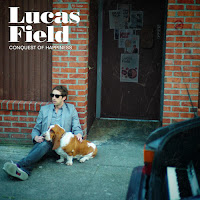 Singer/songwriter Lucas Field has just released his solo debut album entitled “Conquest of Happiness.” Lucas Field is the former frontman of the Los Angeles indie rock band Low vs. Diamond. This new album is a bit of a departure from his band as this album contains no guitars or synthesizers. Lucas tries to embrace and capture the sound of 70’s R&B through his vocals along with keyboards and bass to add some funk to the overall sound of the album.

The album starts with “Let It All Begin” as you instantly notice how wonderfully Lucas Field reaches back to achieve that 70s soul sound. Field gets his groove on for “Start From Scratch,” which is just a fun, sing-along with a great bass line that just gets you to move. Lucas’ song “Hold Her Tonight” is a funk experiment that you’d wish would just go on for hours as he locks in and just jams away. The album closes with a Barry White-type song entitled “Fate,” that carries a smooth R&B vibe.

The new album is available now and was recently featured on music.aol.com as one of the top releases of the week of November 14th. Please visit lucasfield.com for song samples and music videos from the new album. Also, check back for tour dates in the near future.
Posted by JP's Music Blog