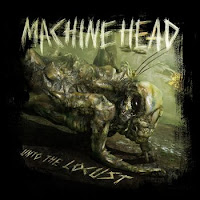 California metal band Machine Head released their seventh studio album “Unto The Locust” at the end of September on Roadrunner Records. The album was considered one of the most anticipated heavy metal albums of 2011. “Unto The Locust” entered the Billboard album chart at #22; the highest chart ranking the band has ever received. The album was recorded at Green Day’s Jingletown Studios and was produced and mixed by lead vocalist/guitarist Robb Flynn.

The album kicks off with the 8-plus minute epic “I Am Hell.” As the song starts off with a chant of “Sangre Sani” you instantly get thrust in the duel heavy guitar and drumming attack that Machine Head is known for. Flynn’s vocals cast you in a dark and scary place as he brings on the plague with his powerful voice. The album’s first single “Locust” shows off the great rhythm section of Dave McClain on drums and Adam Duce on bass. Robb Flynn expands his vocal range on this outstanding track. The band speeds things up with the song “This Is The End” that features some great guitar work by Phil Demmel. Machine Head get the “prog-metal” bug out of their system on “Darkness Within” with mixed results before finishing the album with the metal powerhouse songs ‘Pearls Before the Swine” and “Who We Are.”

The band toured the US this past summer as part of the Rockstar Energy Mayhem Festival and are currently performing live overseas in Europe. Their new album was also recently featured as the "Pick Of The Week" on VH1 Classic's "That Metal Show." For more information on Machine Head’s new album and to view the video for the song “Locust,” head over to machinehead1.com.
Posted by JP's Music Blog