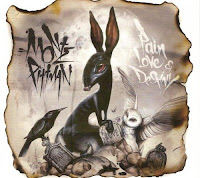 Guitarist Monte Pittman has very interesting back-story. He was raised in Texas, then aspiring to become a professional musician, he moved to LA when he was 24. He proceeded to give guitar lessons to make ends meet, until one such lesson changed his life. British filmmaker Guy Ritchie just received a guitar from then girlfriend Madonna and asked Pittman for lessons. Soon after, Pittman was asked to give guitar lessons to Madonna herself. Then, in 2001 Pittman was asked to be the guitarist in Madonna's band, to which he proudly accepted. Monte Pittman is also currently the guitarist and music director for Adam Lambert's live band.

This past October, Monte Pittman released his second solo album entitled "Pain, Love & Destiny." The sound on this new release flows between acoustic ballads to full-blown rock numbers, and that's just describing the first song, "About You..." His work with Madonna and Adam Lambert has given Pittman a sense of writing a great hook-filled pop song like "Lost" and "The Price of Fear." Not to worry, Pittman does blaze a trail of rock with his guitar on "Close Your Eyes" and the 8-minute epic "Burn Down The Garden." His album closes with the ballad "Predetermined Destiny" which features some beautiful piano from Kelle Rhodes (Randy Rhodes' brother).

Monte Pittman recently performed at the of Blues in Houston, TX on December 1 and will be at the Whisky A Go Go in Los Angeles, CA on December 29. Next year he will also release his own signature guitar. For more information on Monte Pittman, please visit his website montepittman.com.
Posted by JP's Music Blog

Great article for a great musician. I saw Monte live, unplugged, at Cactus Music. This intimate setting in a fantastic record store made the experience unforgettable. Monte hung out, chatted with the fans, posed for pictures, & signed CDs. It made me want to hear more, so I headed to the House of Blues that night. He blew us away....again! Love the sound of Pain Love & Destiny! Thanks Monte!

I saw Monte at several of Adam Lambert's GlamNationTour and his guitar solos were incredible.He and Adam were always in sync, even when Adam frequently would change it up. Monte instinctively, flawlessly stayed with him. Monte also generously spent time with the fans after the concert which was greatly appreciated. It was the best concert I've seen,first class all the way,almost sold out in every worldwide venue. Glad for Monte's success.

Love Monte's new album!! Thanks for the review- people NEED to find this album.

Just caught Monte's shows in Texas and loved the opportunity to see him shred up close! Ready for him to come back already!!

Pain, Love & Destiny is one of my favorite albums - the MONSTER rocks with incredible guitar riffs and lyrics! I enjoy it so much that I'm gifting it for the holidays. If you get a chance to see Monte Pittman live - do it, you won't be disappointed.