CD Review: Mastadon Becomes "The Hunter" Not The Hunted 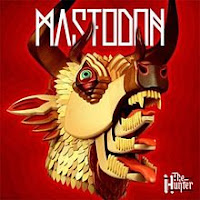 American metal band Mastodon return with their fifth studio album entitled “The Hunter.” It was released at the end of September on Reprise Records and cracked the top 10 on the Billboard Album chart upon its release. The title of the album is in honor of lead guitarist/vocalist Brent Hinds’ brother who died of a heart-attack while out hunting.

While some Mastodon’s albums are considered concept albums, “The Hunter” is not one of them. The songs on this new release are less progressive rock and more guitar riff heavy as in the opener “Black Tongue.” The latest song to be released as a single is “Curl of the Burl” sounds like a throwback to 70s hard rock. This song also garnished the band a Grammy nomination for "Best Hard Rock/Metal Performance." The grungy guitar intro to “Stargasm” lays the groundwork for blast of metal drumming from Brann Dailor. Mastodon feels at home writing about the elements, as in “Dry Bone Valley” and “Spectrelight,” which features Neurosis’ Scott Kelly on vocals. Their prog-rock aspects shine through on the epic-sounding “Creature Lives” and “Bedazzled Fingernails,” before finishing with the mostly instrumental “The Sparrow.”

Mastodon just wrapped up their US tour at the beginning of December and will be heading over to Europe at the start of the New Year. For more information on Mastodon’s new album “The Hunter,” please visit mastodonrocks.com.
Posted by JP's Music Blog