CD Review: Mutemath Claim To Have An "Odd Soul" 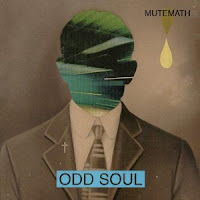 Drum-heavy alternative rockers Mutemath return with their third studio album entitled “Odd Soul.” The album was released at the beginning of October and entered the Billboard Album charts at #24. It is the first album not to feature original guitarist Greg Hill.

The album's lead single is the title track; “Odd Soul” which follows the formula that Mutemath has set up on past releases with a pounding drum-line and chanting chorus. The band picks up the tempo with the almost dance-like beat of “Prytania,” before finding their groove on the blues-infused “Blood Pressure.” Funk rears its head on “Tell Your Heart Heads Up,” then Mutemath go a bit soft on the keyboard heavy “All or Nothing.” The rock returns in “Allies” and “Cavalries” before reaching the experimental sounds of the 7-minute epic “Quarantine.” The album closes with the gentle, floating airiness of “In No Time” which is the most mainstream, pop song to appear on this new release.

Mutemath have one VIP show left this year before heading out on the road in 2012. For a complete list of dates, song samples and album info, please visit mutemath.com.
Posted by JP's Music Blog