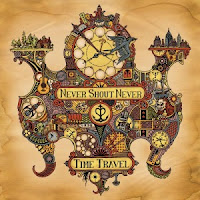 American mainstream rock band Never Shout Never return with their third album entitled “Time Travel.” Never Shout Never is the brainchild of Christofer Drew who took the band from obscure folk, indie artist to Top 40, art-rock superstars. The new album was self-produced by the band and shows a maturity in their execution of Drew’s lyrical experimentations.

The album begins with the electro, art house, pop sounding title track that shows the band experimenting with different sounds and tempo’s right from the beginning. It is hard to categorize the music of Never Shout Never as displayed in “Awful” as it switches from a mainstream, dance-pop beginning to a grand “Queen-like” rock ending which continues into “Silver Ecstasy.” I wish that Never Shout Never would do a rock opera in the near future, because their songs “Robot” and “Complex Heart” sound as if they would fit perfectly into a storied soundtrack. The album closes with “Lost at Sea,” a slow-chanting, power ballad that leaves you wanting more from this band.

Their “Time Travel” tour will begin in 2012 in Europe and joining them will be A Rocket to The Moon and Plain White T’s. The album was released in September on Reprise Records and is available everywhere. For more information on Never Shout Never, please visit nevershoutnever.com.
Posted by JP's Music Blog

Hello,
Excellent writing about Time Travel , it is actually useful for me. keep writing and happy blogging.