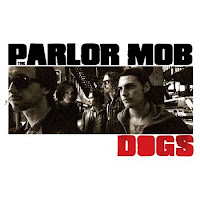 From New Jersey comes the Parlor Mob with their latest album, “Dogs.” The album was released at the beginning of October and is their second release on Roadrunner Records. The band’s youthful energy is felt throughout the album and is very contagious when listening.

The album begins with a blast of sound from “How It’s Going To Be” as the band’s energy pushes the song into high gear powered by the drumming of Sam Bey. The album’s first single, “Into The Sun” has and edgy hard rock sound with a strong, powerful vocal delivery by Mark Melicia. The guitar groove on “Fall Back” draws strong similarities to The White Stripes as this is one of the highlights of the album. Melicia flexes his vocal muscles on the chorus of “I Want To See You,” while the rest of the band catches fire on “Take What’s Mine.” The Parlor Mob takes things down a notch with the acoustic ballads “Slip Through My Hands” and “Holding On” before finishing with slow burn of “The Beginning.”

The Parlor Mob just wrapped up their tour and currently have no dates on the schedule. Check out the band’s website, theparlormob.com, for more information.
Posted by JP's Music Blog

You left out the fact that iTunes has chosen "DOGS" the Rock Album of the Year for their 2011 Rewind!

Give yourself a present -- see them live!