CD Review: Republic Of Letters Tells Us Some "Stories" 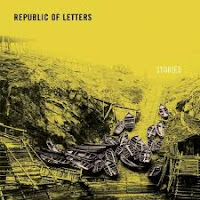 From San Diego, CA come alternative rockers Republic Of Letters with their debut album “Stories.” The album was produced by Brian Karscig (Louis XIV) and plays heavily on their influences like U2, Bruce Springsteen and The Police.

The album begins with the piano-driven “Lost Chord” as the band pull off their best Coldplay impersonation. The album’s first single, is the title song “Stories.” The song is a constant build-up of the instruments until the song’s final chorus. The band takes a page out of The Cure’s songbook with “Long Way Down” and “Endless Drive,” which carry a modern tempo beat that plays it safe in-order to accent the vocals of Chris Venti. The album closes with “Kate,” a Train-like rocker with great pop vocals that is sure to please the ears of anyone listening.

Their new album “Stories” was released back in April, but is still gaining momentum as the band receives play on radio stations in the California area. For more information on Republic of Letters, please visit their website at republicofletters.com.
Posted by JP's Music Blog