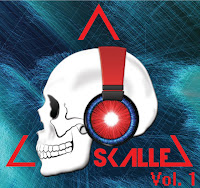 From Mexico comes electro-rock band Skalle with their debut album properly titled "Vol. 1." The band is the brainchild of drummer/composer David Adrian who has performed solo and has been a part of instructional drumming videos. This latest adventure takes him to the electronic side of drumming, combining the edginess of hard rock with club-style beats.

The album opens with "Be Yourself," a very fast paced keyboard & drum driven song that draws similarities to The Prodigy and The Chemical Brothers. The album is more of a release for David Adrian to explore the electronic side of the drum world. The songs carry very little vocals, but the music of Skalle makes you want to release the pressures of the day and just let go and enjoy the beats of songs like "Nocturno" and "Electro Swing." The song "Lehania" sounds like it came from the original Tron movie while "Electrokinesis" is as close to mainstream rock music as you'll get on this album. Skalle features a bonus song entitled "Anime Song" which sound like you time warped back to the 80s and you are surrounded with synthesizers.