CD Review: Stew & The Negro Problem Are "Making It" Happen 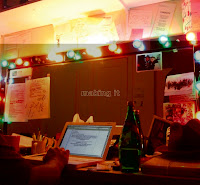 The duo of Stew and Heidi Rodewald return from their Tony-winning play “Passing Strange” with a new album entitled “Making It.” The two hit it big with their musical that was also turned into a feature film by Spike Lee Joint. Now, riding on a new high, the two, along with Stew’s band The Negro Problem have painted a new picture of love and art with this latest release.

Stew and the band begin right where they left off with the seven-minute storied song “Pretend.” While Stew’s vocals are still the main focus of the album, Heidi’s voice has been brought to the fore-front and featured in many of the songs like “Love Is A Cult” and “Leave Believe.” The simple beats and the tone of Stew’s singing in “Black Men Ski” is so contagious that you can’t help yourself get wrapped up in singing along. Stew & The Negro Problem rock out the solo on the build-up of “Speed,” but also know has to soften their sound with the gentle strings of “Suzy Wong.” Heidi finds the spotlight once again in the up-tempo “Therapy Only Works If You Tell The Truth” before the album finishes with the R&B flavored “Treat Right.”

Stew & The Negro Problem have a few university shows scheduled for 2012 and the new album will be released on January 24 through Redeye Distribution. For more information, check out their website stewsongs.com.
Posted by JP's Music Blog

nice idea.. thanks for sharing.