CD Review: The Wiggles Get "Rewiggled" On Tribute Album 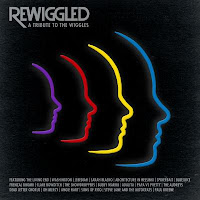 Australian band The Wiggles are easily considered one of the biggest children's groups of all-time. Now, they are celebrating their 20th anniversary as a band and ABC Music is paying homage to them by releasing an album of cover songs called "Rewiggled." The album gathers some of the biggest names of the Australian indie music scene to record their own version of many Wiggles' classics like "Fruit Salad" and "Wiggle Party."

Many of the artists stick close to the original as in the opener "Hot Potato" by The Living End as they speed the tempo up just a bit, but still keep The Wiggles' playful energy. The band Washington turn "The Monkey Dance" into a California surf sounding song. Spiderbait turns "Rock-A-Bye Your Bear" into a fun, punk spectacle, while Oh Mercy give "Toot Toot, Chugga Chugga Big Red Car" an alternative rock remake. Some songs like "Get Ready To Wiggle" by Adalita and "Wake Up, Jeff!" by Bluejuice get totally reworked that they almost become unrecognizable. At least every band injects their own style into these classic children's songs.

For more information on this fun, exciting, interesting tribute album to one of America's (and the rest of the world's) biggest children's band, The Wiggles, please visit facebook.com/rewiggled.
Posted by JP's Music Blog