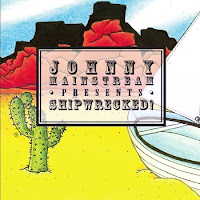 Connecticut band, Johnny Mainstream released their debut album “Shipwrecked” back in February 2011 and have already begun recording their follow-up album “Ghost Broadway.” Johnny Mainstream also had a busy year performing live all over the east coast and is also looking forward to getting back out on the road.

Their sound on their debut album is a mix country and Americana as displayed in the songs “The Mayor’s Daughter” and “Georgia.” The band has fun performing and it shows in their up-tempo songs “#9” and “Radio” as their enjoyment is felt through their recordings. The acoustics of “Mobile Phone” and “Foxholes” are the perfect setting for the song’s storied lyrics. The album finishes with “n nyc” which plays out like the ending of a long distance relationship.

Johnny Mainstream has two shows left this year, one at The Main Pub and the other is a Grady Tavern both in Manchester, CT. Look for the band to schedule more dates after they finish up recording their new album. For more information, check out johnnymainstream.com.
Posted by JP's Music Blog