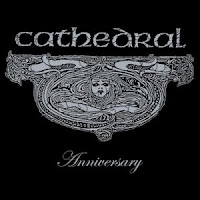 English metal band Cathedral have decided to call it quits after 22 years. Their brand of doom metal, forged with extreme metal, slowed the tempo down in order to make their music sound heavier. The band recorded their 20th anniversary live show at the Islington Academy in London and released it on November 22 as "Anniversary." It is the first official live release from the band.

The 2-disc set features over 2 hours of live music from Cathedral. The first disc, entitled "Back to the Forest (Forest of Equilibrium)" contains many of the band's epic songs like the 11-minute "Commiserating the Celebration (of Life)" and the 10-minute "A Funeral Request." The band picks up the tempo for "Soul Sacrifice" giving us a glimpse of some thrash metal before the disc ends with "Reaching Happiness, Touching Pain," which almost reaches the 11-minute mark.

The second disc, entitled "Freak Winter" begins with the band experimenting with a more hard rock sound on "Funeral of Dreams," before returning to the slow-jaunt of "Enter The Worms." One of the band's singles, "Midnight Mountain" makes an appearance to the delight of fans. One of the highlights of the second disc is the 11-minute "Carnival Bizarre." Cathedral close the show with the heavy rockers "Vampire Sun" and "Hopkins (Wichfinder General)."

Look for Cathedral to release their final studio album in 2012. For more information on this live album, visit the band's website, cathedralcoven.com.
Posted by JP's Music Blog