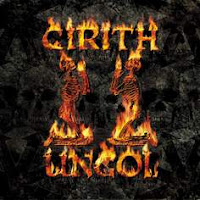 California 80s metal band Cirith Ungol (pronounced "kirith ungol") was one of the most underrated bands during that time. The combination of fantasy-oriented lyrics and synth-heavy metal was the perfect mix for the decade, but it was tough for the band to find a home among the hair metal that took over the radio and videos. Now, the band is releasing a 2 CD/1 DVD collection of rare and live songs entitled "Servants of Chaos" on January 31st in the US. The album was originally released only in Europe back in 2001 as that was were their popularity grew during the eighties.

This set shows many different sides of the band's music, from the straight-on metal of "Last Laugh" to the synth-rock of "Frost and Fire." At times, the band sounds like a Judas Priest cover band, but it's when they add that extra flair to the songs like "100 MPH" and "Bite of the Worm" that really make them stand out as a metal band. The first disc is made up mostly of rare tracks and demos as some of the songs sound very rough and unpolished. The guitar work in "The Twitch" and the two "Lankhmar" songs is one to behold, while "Witchdance" is just plain annoying.

The second CD shows off the band's talents, beginning with "Death of the Sun" which sounds like Rob Halford singing Black Sabbath. Then they do a great cover of "Fire" originally performed by The Crazy World of Arthur Brown, capturing the insanity of the vocals. Listening to the five live songs give us an idea of how good this band was live, putting all they had into their performance and also making sure that the audience had a good time. The disc closes with a cover of the of "Secret Agent Man" and sounds of a Ferrari 308QV.

The DVD is an amateur filmed show from 1984 where the band performed live at the Wolf and Rissmiller's Country Club. The DVD includes 8 songs as they were the opening band that evening. This is one of the few live videos to even exist of the band.