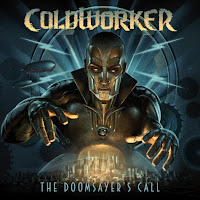 From Sweden comes death metal band Coldworker with a new release entitled "The Doomsayer's Call." The new album has been two years in the making and will be out on February 14 through Listenable Records.

The album opens with "A New Era," which is actually one of the slower songs on the album. It features one of many great, but all too quick guitar solos by Anders Bertilsson. Then, the songs on the album take-off with neck-breaking speed and lyrics about the occult. The band lets up for a moment with "The Pessimist" which doesn't just go for speed but, changes the tempo slightly to keep the song fresh. Coldworker continue their attack with the aggressive vocals of "Living Is Suffering" and machine-gun drumming of "Violent Society." The album closes with the song "The Phantom Carriage," which may be the most accessible song on the album for those not familiar with Coldworker's music.

The band has one show scheduled at the moment at Neurotic Deathfest 2012. For more information on Coldworker and their new album, check out coldworker.com.
Posted by JP's Music Blog