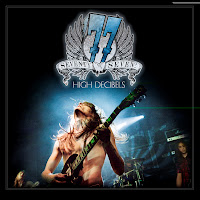 From Spain comes the numbered band 77 with a new album entitled "High Decibels." The album will be released on February 28 through Listenable Records. The band's name is derived from the era of music that their sound comes from. The new album sounds like a lost material from the AC/DC era with Bon Scott on vocals.

The opening song, "High Decibels" is a gritty, guitar riff-filled rocker that fits in perfectly with the classic rock of the 70's. The guitar solos in "(Gotta Go) Gotta Hit The Road" and the bonus song "Things You Can't Talk About" leave you wanting more as you wish the solos would go on for hours. The band tackle the garage rock of the 60's with "Gimme A Dollar" as their punk attitude rears it head. The 8-minute album closer "Promised Land" brings together the guitar riffs of AC/DC with the swagger of Aerosmith, a combination that works well with this band.

The band will be sticking close to home with a performance in Barcelona, Spain on January 26th. For more information on this great new rock band, check out their myspace page (myspace.com/seventysevenrocks).
Posted by JP's Music Blog