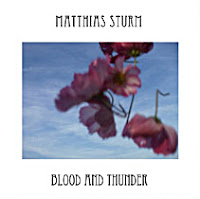 Artist/musician Matthias Sturm has a new album entitled “Blood and Thunder” which will be self-released on January 17. The new album features guest musicians Dave Krusen (Pearl Jam, Candlebox) on drums and the Grammy nominated Erin Alden (Octane, Starlodge Entertainment) on piano and arrangements. The album was produced by David Hillis (Pearl Jam, Afgan Whigs, James Blunt) and recorded at Blind Melon’s studio. With all these factors, how could the album not be a success?

The album begins with the gentle “Mister D” in which Sturm’s German-accented voice gets surrounded by a nice string arrangement. It almost sounds like it was imported as it does not follow the conventional pop song structure which is what makes this album interesting to listen to. “Blood and Thunder” sound like two song ideas combined into one as the vocals don’t always follow the music being performed. Sturm’s songwriting really shines on “What A Day” as he adds a catchy, Joe Strummer-type chorus with and interesting, almost reggae vibe. The groove of “Baxter Galoway Meets Mr Handsome” seems like it would fit in to a Broadway show more than on this album, but it is still a very cleaver song. Matthias Sturm sings in French on “Pierrot” and “L’Heure” as the music sets the mood of the songs without a need of knowing or understanding the lyrics. The album closes with “Crow Food” as Sturm tells us a story with great lyrics and chorus that just repeats in your head.

15% of sales of the new album through CDBaby.com will be donated to the World Wide Fund for Nature (WWF). For more information, check out Matthis Sturm’ facebook page (www.facebook.com/pages/MATTHIAS-STURM/182224888491205).
Posted by JP's Music Blog