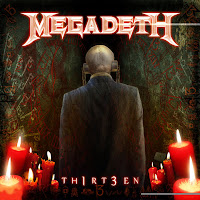 American metal band Megadeth return with their thirteenth album aptly titled “Thirteen.” The past year was huge for the band as they performed as a member of “The Big 4” of thrash metal and their break-through album “Peace Sells…but Who’s Buying?” celebrated its 25th anniversary. Now the band breathes new life into this new album with a new sense of purpose to prove they are one of the biggest metal bands on the planet.

The album begins with “Sudden Death,” a great introduction to the band’s musical talents as the duel guitar attack of Chris Broderick and Dave Mustaine just take you for a ride and once Mustaine’s vocals kick in, all bets are off. While Mustaine’s vocals are noticeably deeper, they fit the music and lyrics perfectly. The album’s latest single “Who’s Life (Is It Anyways?)” features an onslaught of drums from Shawn Drover. Also returning after an eight year hiatus is original bassist Dave Ellefson, who adds that extra bit of heaviness that’s been missing on the bass in recent years. The song “Never Dead” which was originally written for the video game of the same name returns the Megadeth sound back to their trash days. One of the earliest written songs that appear on this album is “New World Order” which was originally written back in 1991 and features some of Mustaine’s darkest lyrics. Mustaine’s political views enter in on the “Millennium of the Blind,” before ending with the autobiographical “13.”

Megadeth will begin their Gigantour at the end of January which also includes Motorhead, Volbeat, and Lacuna Coil. The tour will begin at the Susquehanna Bank Center before making a stop and the Mohegan Sun Arena on January 27th. The new album, “Thirteen” was released back in November and entered the Billboard Album chart at #11. For more information on the band, check out their website at megadeth.com.
Posted by JP's Music Blog