CD Review: Minus Ned Are "Finally Fitting In" 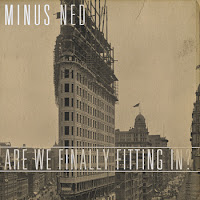 LA band Minus Ned just released their debut full-length album entitled "Are We Finally Fitting In?" back in October and have also finished up a successful fall tour. The band also recently appeared on the morning show Connecticut Style performing the first single, "III" from the new album.

The album begins with "New Orleans" which combines an acoustic island flair with the drumbeat of a Mardi Gras parade. The only thing missing are those famous New Orleans-style horns that would put you right in the middle of the Louisiana festival. Singer Marissa DuBois gets her chance to shine, showing us her gentle, sultry voice in "Afraid," then rocking out on "III" and "Gotta Get Out." Minus Ned get their groove on with the bluesy "Wayside," before finishing with the southern rock gem "Come On" and the uplifting acoustic ballad "Something Better."

For more information on Minus Ned and their new album, please visit their website at minusned.com.
Posted by JP's Music Blog