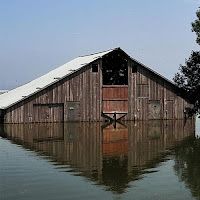 From Chicago comes the debut album from the trio known as Mutts. The disc is called “Pray For Rain” and it is the band’s first full-length release and has reached #107 on the CMJ Top 200. The band combines the rawness of The Black Keys with the heavy rock sound of Queens of the Stone Age.
The album opens with the banging sound of “Fool” which sounds like the band is killing a piano as lead singer Mike Maimone does his best Tom Waits impression on vocals. The band has gone through multiple drummers before settling on Joe Mullen who joined the band in July of 2011. Mullen displays his talents on “Not Ready,” before the band finds their funk-groove on "D.O.B.” Mutts get experimental on the hard-rock sounding “Throwback,” then go west on the California-surf of “Blind Truth.” The album closes with “Putting On A Show,” which is exactly what the band tries to do as they build-up grunge-style guitars to a chaotic clonclusion.
The band has three shows lined up, including one on January 23rd in Chicago, IL. For more information and song samples, please visit wearemutts.com.
Posted by JP's Music Blog