CD Review: Shotgun No Blitz Call The Plays On "Over It" 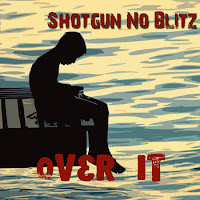 Pennsylvania punk band, Shotgun No Blitz released a new EP last year entitled “Over It” which is beginning to get attention in the Northeast. The band comes out blazing with a punk style similar to Face To Face on the album opener “You’re Not As Cool As You Think.” The energy continues with “Mouthful” and “We’re Swimming at the Bottom of the Sea (Drowing).” They bring a more heavy metal approach to “There’s Nothing More To You” before finishing with their fan-favorite, 2010 song “Objects in Mirror are Closer Than They Appear.” The song also shows the band expanding on their punk-rock roots.

Shotgun No Blitz just hit the studio to record their follow-up album. They also have a couple of shows lined-up in Pennsylvania area. For more information, check out the band’s facebook page at http://www.facebook.com/shotgunnoblitz.
Posted by JP's Music Blog