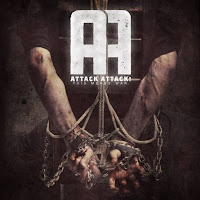 From Columbus, OH come hardcore metal rockers Attack! Attack! with a new album entitled “This Means War.” The album was released back in January on Rise Records and peaked at #11 on the Billboard Album chart. The album was produced by frontman Caleb Shomo and is also the first album not to feature Joey Sturgis in the production seat.

The album comes blasting out of the gate with the lead-off track, “The Revolution,” which seems like a “call to arms” as Shomo’s vocals attack the lyrics. The album’s first single is “The Motivation” which is just a complete barrage of music and noise until the slow-down chorus. The album’s second single is “The Wretched,” that features some nice drum work by Andrew Wetzel as Shomo’s vocals become a little more mainstream rock. The album continues with this hard-hitting formula all the way through to the last song, “The Eradication.” Attack! Attack! give you 36 minutes of adrenaline pumping, hardcore music.

Attack! Attack! is currently on tour promoting the new album. They will be in Connecticut on February 25 at Tuxedo Junction in Danbury. For a complete list of dates and information on the new album, please visit attackattackoh.com.
Posted by JP's Music Blog