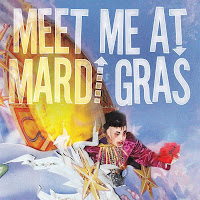 New from Rounder Records, a division of the Concord Music Group, comes a new compilation just in time for Mardi Gras. The new album entitled “Meet Me At Mardi Gras” brings together a dozen artists that bring some of these classic southern songs to life adding their own flair.

The album begins with the funky original, “Say Na Hey,” a song that is sure to get you up out of your seat and moving. The most famous song on this compilation is “Goin’ Back To New Orleans” which has been covered by artists, Dr. John and Deacon John. The song is performed here by Joe Liggins and his backing jazz band, The Honeydrippers who put a classic spin on the song. Singer Zachary Richard adds a bit of island flair to The Hawkettes original “Mardi Gras Mambo,” while the New Orleans Nightcrawlers stretch-out the party-filled “Funky Liza” to over seven minutes. The fun continues with Larry Williams' quick version of the traditional “Jockamo (Iko-Iko)” and also with Al Johnson’s retro sounding “Carnival Time.” The parade begins with this New Orleans’ anthem “Go to the Mardi Gras,” before the album closes with the Mardi Gras staple “Meet Me With You Black Drawers On” performed by Chuck Carbo who is from the vocal group The Spiders.

This album is sure to capture the spirit of that wonderful February festival. So, if you can’t make it to New Orleans, all you need to do is pick-up this album and have your own Mardi Gras wherever that may be. This album was released at the beginning of January and is available now through major music retailers. For more information, please visit concordmusicgroup.com.
Posted by JP's Music Blog