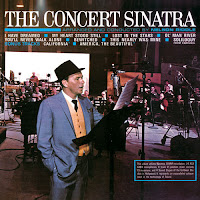 In 1963, singer Frank Sinatra wanted to record an album using multi-track recorders, but the problem was that the technology wasn’t invented yet. Instead, Sinatra recorded his album “The Concert Sinatra” on a motion picture soundstage with multiple recording machines synchronized to capture as many different channels of stereo as possible. Since its original mix was prepared almost 50 years ago, these tapes of the sessions have not been touched since.

Fast forward to 2011, producer Charles Pignone used the original “Magnestripe” tapes from the recording session to create a completely new, remastered sound mix for this 2012 release. “The Concert Sinatra” has never sounded better. You can hear every instrument in its purest form as you feel as if you were on that soundstage back in 1963. Right from the first verse of “I Have Dreamed” Frank’s voice just wraps you up and takes you on a journey. The orchestra, conducted by Nelson Riddle, finds its musical peaks in the songs “You’ll Never Walk Alone” and “This Nearly Was Mine,” without getting in the way of Sinatra’s classic vocals.

This new remastered version also includes two bonus songs that were recorded during these sessions, but were released as 45-rpm singles instead of being included on the original album. The song “California” was commissioned by Governor Edmund G. “Pat” Brown for Sinatra to create a new song for a Sacramento gala in 1963. The other bonus song is a never-before-heard version of our national anthem, “America, The Beautiful” sung by Sinatra with a 24-voice choir.

The newly released version of “The Concert Sinatra” was released back in January through the Concord Music Group. For more information, please visit concordmusicgroup.com.
Posted by JP's Music Blog