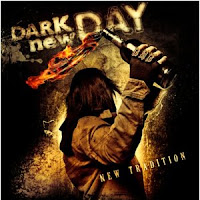 After forming in 2004, Dark New Day hit it big in 2005 with their debut album “Twelve Year Silence.” The band, consisting of members of Evanescence and Sevendust, toured and released an EP the following year. At the completion of Dark New Day second album, “Hail Mary,” Warner Bros. Records dropped the band and the album was never released. Fast forward to 2012 and Dark New Day is ready to rise again with a new album entitled “New Tradition” to be released on February 28 through Goomba Music.

The new album begins with the grungy, buzzsaw guitars and pounding drums of “Fist From The Sky” as you can tell the band has a chip on their shoulder. Lead singer Brett Hestla lays it all on the line and sets up the listener for a hard rock adventure. The first single from the new album is “New Tradition,” and it carries a very heavy, modern rock feel with some great guitar work from Clint Lowery. The slow, dark beginning of “Tremendous” gets built up to an unforgettable, sing-along chorus. Dark New Day break-out the grooves on “Straitjacket” and “Breakdown,” which shows some diversity in the band’s overall sound. The album finishes with “Burns Your Eyes,” one of the more aggressive songs on the album. This new release features 13 songs that rock, with no ballads or second-rate filler songs as Dark New Day put everything into each song.

The band is looking to tour behind the release of their new album, “New Tradition” so be sure to check out their myspace page (http://www.myspace.com/darknewday) for tour announcements.
Posted by JP's Music Blog