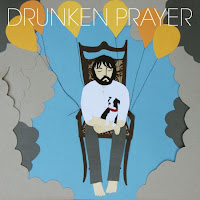 Indie-folk band Drunken Prayer are releasing their sophomore album, “Into The Missionfield” on February 7 through Fluff & Gravy Records. The music on this new album ranges from classic Americana to garage rock with clever folk lyrics sprinkled throughout.

The album starts off with the gentle, slow-build of “Brazil,” which introduces to singer Morgan Christopher Geer as the songs sounds like an outtake from The Band’s early years. Drunken Prayer picks up the tempo on the fast-paced garage rocker “Ain’t No Grave,” before heading out to the country on “Always Sad” with its simple, easy to follow lyrics. The band heads back to the garage on the sixties sounding “Talk A Walk” then slows down for the country jaunt of “The Missionfield.” Geer has fun with his lyrics in the acoustic storytelling of “Beachcomber,” then finishes with the slow burn of “Never Tend To Forget.”

Drunken Prayer have a load of tour dates, beginning along the east coast in March before stopping at the SXSW festival and the Doo-Nanny Outsider Folk Art Festival at the end of the month. For a complete list of tour dates and information on the new album, check out drunkenprayer.com.
Posted by JP's Music Blog