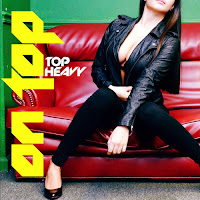 From Philadelphia comes the metal trio On Top with their debut album “Top Heavy.” The album was released in November of 2011 through Horror Pain Gore Death Productions and features rerecorded versions of songs from their first two independent releases.

The band comes bursting out of the gate with a quick, instrumental introduction before diving into their first song “Into The Night.” The song brings you back to the 80’s metal days when flashy guitar riffs and killer vocals ruled the airwaves. Songs like “Sleepness” and “Die High” contain a heavier metal sound than that of some of the hair metal bands of the day, but the topics of songs like “Another Night of Sleaze” and “Hot N Wet” fit in perfectly to that era of music. The album ends with some of the best songs, the quick driving “Success And Excess” and the sing-along chorus of “Up To No Good.”

On Top have a few shows scheduled in March, before the band head into the studio to record their follow-up album. Check out the band’s facebook page (http://www.facebook.com/ONTOPOFFICIAL) for more information.
Posted by JP's Music Blog