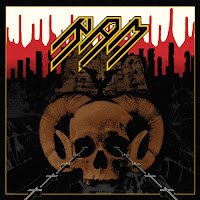 Heavy Metal band RAM return with a new album entitled “Death” on Metal Blade Records. Since their formation in 1999, RAM has stayed true to what heavy metal meant and stood for. Their new release continues that belief with amazing guitar riffs and “in your face” vocals.

The album begins with the 3-minute, keyboard heavy instrumental that lays the ground work for your trip through the heavy metal sounds of “Death.” The blazing guitars and powerhouse drumming of “…Comes From The Mouth Beyond” is what fans of metal music have been waiting for from RAM. The album’s first single, “Defiant” has that classic New Wave of British Heavy Metal sound, very similar to early Iron Maiden. RAM speeds things up with the head-banging drumming of Morgan Pettersson in “Under the Scythe.” The album closes with the instrumental soundscapes of “1771,” which bookends the album nicely.

RAM have a couple of festival scheduled at the moment, but watch for more dates to be announced soon. For more information, check out the band’s website (http://www.metalblade.com/ram/).
Posted by JP's Music Blog