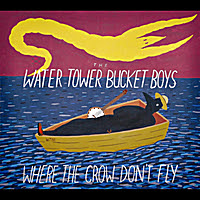 After less than a year, the Water Tower Bucket Boys return with a five-song EP entitled “Where The Crow Don’t Fly.” A vast amount of inspiration must have hit when the Boys recorded their 2011 album “Sole Kitchen” as these songs rank up there with some of their best work. Most of the songs on this new release have a darker overtone than its predecessor, but the storied lyrics are still fun to follow.

The band breaks out of its folk shell for the upbeat, toe-tapping “Walkin’ The Road” which is the most fun the band has performing on this EP. “Pilgrim Song” displays the wonderful harmonizing and great musicianship between the bandmates. The Water Tower Bucket Boys bring out their pop-song instincts on “Easy Way Out” before finishing up with the quietly, gentle “R Song.”

The Boys are currently on tour, performing along the west coast until May. Check out their website (watertowerbucketboys.com) for tour information, song samples from the new album and more.
Posted by JP's Music Blog