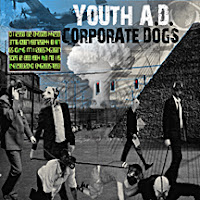 From Serbia comes the industrial music of Youth A.D. with a new album entitled “Corporate Dogs.” Youth A.D. is the brainchild of Stevan Pivnicki with the purpose to create music that will never be compromised by trends or fashion.

The ten-song release begins with “God TV,” which combines the clash of synthesizers and drum beats that are layered on top of unrecognizable vocals. This becomes the blueprint for the rest of the album with changes in beats as in “Focus On The Mission” and different mixes of heavy metal vocals layered on electronic sounds. The song “State Of Terror” sounds like an early Nine Inch Nails outtake, while “Death Inc.” tries to summon the underworld with its buzzing vocals. The album finishes with “Nothing” which plays out like a movie soundtrack with samplings.

The album was released in September of last year through CyberfArts. For more information on Youth A.D., check out facebook.com/youthad.
Posted by JP's Music Blog