CD Review: Angel Witch Return With "As Above, So Below" 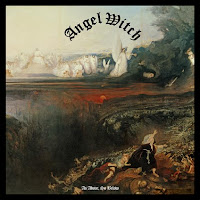 Classic British heavy metal band Angel Witch return with their first album of new material in over 14 years. The new album entitled “As Above, So Below” features original member Kevin Heybourne with a new set of musicians including Will Palmer, Andrew Prestidge and Bill Steer of the band Carcass. The new album was produced by Jaime Gomez Arellano (Ghost) and will be released on March 27th through Metal Blade Records.

The album begins with the first single from the album, “Dead Sea Scrolls.” The song’s origin dates back to the classic New Wave of British Heavy Metal years to which Angel Witch was one of the founding members of. The song still carries that heavy drumming, blazing guitar sound as Heybourne’s vocals continue to sound timeless. The band picks up the tempo with the quick, pulse-pounding beats of “Into The Dark,” which was written back in the late seventies, but fits in perfectly with newly written powerhouses like “Geburah” and “Upon This Cord.” The album closes with another new song, the guitar riff driven “Brainwashed” which leaves you wanting more from this classic band. Let’s hope these members stick together for more than one album, as this is the best that Angel Witch has sounded since their early 80’s era.

Angel Witch currently have no live dates scheduled at the moment, but the release of new material should entice this band to head out on road sooner rather than later. Be sure to visit the band’s myspace page (http://www.myspace.com/youranangelwitch) for information.
Posted by JP's Music Blog