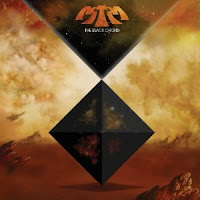 California progressive-metal band Astra is releasing their second full-length album of their six years together. The new album is called “The Black Chord” and expands on the sound of their psychedelic debut album. “The Black Chord” is scheduled to be released on March 27th through Metal Blade Records.

The band is known for their expanding, jam-band type solos and the album begins with “Cocoon,” a song that just keeps stretching the sound of the band. The almost 9-minute instrumental is as raw and as complex as some early 1970’s Pink Floyd. The title song, “The Black Chord” sounds like a 15-minute ode to King Crimson with it heavy keyboard and fuzz guitar sound. Astra hit the hard-rock notes on “Quake Meat,” before visiting the mystical sounds of “Drift.” The album closes with the 9-plus minute Pink Floydian sounds of “Barefoot In The Head.”

The band performed an album release party on March 16, but look for more dates once their sophomore masterpiece is released. Be sure to visit asteratheband.com for more information.
Posted by JP's Music Blog