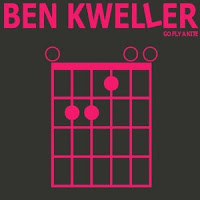 Singer/songwriter Ben Kweller returns with a new album entitled “Go Fly A Kite.” This is Kweller’s fifth album and the first release on Kweller’s own record label, The Noise Company. This release was held back from its 2011 release date in order for Kweller to fine-tune it for a perfect sounding album. Kweller plugged in for this album, adding more electric guitars and eclectic sounds that any previous album.

The new release begins with the up-tempo, alternative rocker “Mean To Me,” which sounds like it may be directed at his formal record label. Fans of Kweller’s earlier releases may be in for a shock as he plasters the album with grunge-like guitar solos and dark lyrics. He does show us glimpses of the past with the acoustic strumming of “Out The Door” and “Full Circle,” which also features some great harmonizing. Kweller pours his feelings into “Gossip” and “The Rainbow” as he lays his heart on the line, singing these great lyrics that we can all relate to. The song “Justify Me” sounds like an outtake from Elvis Costello’s early days as Kweller’s talents are heard all over this release by making his songs sound instantly classic.

Ben Kweller is currently on tour promoting his new album, “Go Fly A Kite.” He just finished a tour of Australia and will be performing his first show back in the U.S. on March 20 at the Wadsworth Atheneum Museum of Art in Hartford, CT. For a complete list of tour dates and information on the new album, check out benkweller.com.
Posted by JP's Music Blog