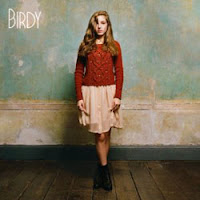 British born singer/songwriter Birdy is ready to release her self-titled debut album on March 20 through Warner Bros. Records. Birdy, born Jasmine van den Bogaerde, began playing piano at age 7 and won a UK song-writing contest at age 12. By the time she was 15, she had a top 20 hit on the UK singles chart with her rendition of Bon Iver’s “Skinny Love” and now she is ready to conquer the world with her voice. She also has an original song ("Just A Game") featured on The Hunger Games soundtrack. The soundtrack includes songs from Taylor Swift, Maroon 5, Miranda Lambert and others.

Birdy's new album begins with a very stark, simple, emotional cover of Phoenix’s “1901.” Her voice is so pure and delicate at times that you are blown away when she opens up as in “The District Sleeps Alone Tonight.” Birdy’s voice builds with excitement during the harmonizing of the Fleet Foxes' “White Winter Hymnal.” She balances that with the gentle delivery of “Shelter” and you can hear Birdy pour her heart and soul into this performance. She experiments on her sound with “Young Blood,” then plays it safe on her cover of James Taylor’s “Fire and Rain.” The only original composition is a piano ballad “Without A Word” as Birdy begins to sound a little like British powerhouse vocalist Adele. The album closes with a cover of the High Violet’s “Terrible Love” which fits Birdy’s vocal style perfectly.

To celebrate the release of her new album, Birdy will be performing on The Ellen DeGeneres Show on March 20th and on Conan on March 21st. She has one show scheduled at the Tabernacle in London which has already sold out. Hopefully she will have more live dates coming soon. For more information on this rising singer, please visit her website, officialbirdy.com.
Posted by JP's Music Blog