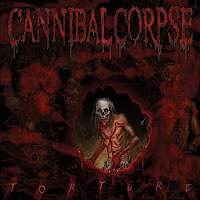 Death metal band Cannibal Corpse will be celebrating their 25th year as a band next year. While the members of the band have changed over the years, their sound and purpose has not wavered. The band will be releasing their twelfth studio album on March 13 entitled “Torture.” It will be released through Metal Blade Records and was produced by Hate Eternal guitarist Erik Rutan (Six Feet Under, Goatwhore).

The band’s aggressive sound is heard (and felt, if your speakers are turned up) right from the speed metal beginning of “Demented Aggression.” George “Corpsegrinder” Fisher’s vocals are immediately present as the album features some of the band’s best work. Songs like “Scourge of Iron” and “As Deep As the Knife Will Go” show how much the band’s songwriting has grown. Instead of just speed, they incorporate melodies and structures into their arrangements. The power of the duel guitar attack is most noticeable in “Crucifier Avenged” as the album closes with the blazing speed of “Rabid” and machine-gun drumming of "Torn Through.”

Cannibal Corpse has just finished touring over in Europe and will begin their U.S. tour in April. Look for them to lead a path of destruction before heading back over to Europe in June of this year. Their tour wraps up at the Extreme Festival in July. For a complete list of tour dates and information on the new album, “Torture,” check out the band’s website (cannibalcorpse.net).
Posted by JP's Music Blog