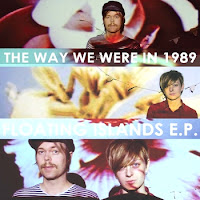 Seattle duo, The Way We Were In 1989, is ready to release their second album entitled “Floating Islands.” The 6-song EP is like a book of short stories as each song tells us about a different adventure.

The lead-off song “Cleanse” appears twice on this release, once as a 1980’s pop, synth-heavy filled piece and the other is a more mellow-toned, low-pulse beat driven song. The vocals of Joyell Dunay become the focus of the moody “Rock & Roll,” while the duet, which includes partner Kelly Dale, on “Cliffs of Dubland” never, elevates the song out of its monotone sound. The album closes with the 7-minute, experimental “Battlegrounds of Colorado,” which becomes the most interesting song on this release.

The Way We Were In 1989 just finished up some shows in the Seattle area, but has nothing further on their schedule. Check out the band’s facebook page (http://www.facebook.com/TheWayWeWereIn1989) for more up-to-date information.
Posted by JP's Music Blog