CD Review: The Hobart Brothers & Lil' Sis Hobart "Have Each Other" 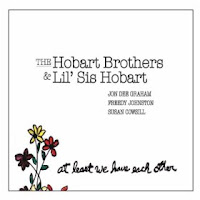 Singer/songwriters Jon Dee Graham, Freedy Johnston and Susan Cowsill came together in 2010 to write a few songs about their past, working in restaurants. The trio wrote about ten songs and set out in 2011 to perform at the SXSW festival in Austin, TX. After a huge response, they decided to fund a recording project to get these songs onto tape. Now on February 28th, we finally got to hear this trio of songwriters who have become known as The Hobart Brothers & Lil’ Sis Hobart. Their new album is entitled “At Least We Have Each Other” and was released on Freedom Records.

The album features seven completed songs from the band’s latest session and three songs from their early songwriting-demo sessions. The album begins with the up-tempo country swing of the “Ballad of Sis (Didn’t I Love You).” Susan Cowsill takes the lead vocals as she sings with a specific passion and power that starts the album off perfectly. The songs on this release carry a country, bluesy vibe as in “Why I Don’t Hurt” and “Almost Dinnertime.” The band also brings in tones of classic 60’s pop as in “I Never Knew There Would Be You” and also the folk storytelling of “I Am Sorry” make this a classic sounding record that should be considered one of the best releases of 2012. The looseness of the recording comes through in songs like “First Day On The Job” and the album closer “The Dishwasher.”

The album also comes with the option to download the complete nine song demo-session. Some of the demos like “Sweet Senorita” and “All Things Being Equal” give the songs a more country, campfire flavor to the overall sound. It’s almost like having another entire album of new songs.

The Hobart Brothers & Lil’ Sis Hobart have a new website (thehobartbrothers.com), but currently have very little information on there. Be sure to check back periodically as more information and tour dates are announced. The new album “At Least We Have Each Other” is available now on CD, LP and digital download.
Posted by JP's Music Blog