CD Review: I See Hawks In L.A. Have A "New Kind Of Lonely" 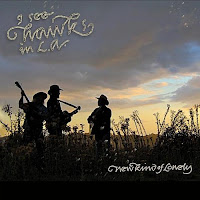 Alternative country group I See Hawks In L.A. is preparing to release their sixth album entitled “New Kind Of Lonely.” This is an entirely acoustic album that was recorded together at Marc Doten’s Echo Park Studio with some well-placed microphones to capture everything. This new album will be released on March 6 through Western Seeds Record Company.

The songs on this new release carry a very laid-back, campfire vibe as the acoustic guitars and storytelling lyrics set the tone. The Hawks tackle some tough, dark topics with the album opener “Bohemian Highway” and “Your Love Is Going To Kill Me.” They also try to make the topic of death a little lighter with “The Spirit Of Death” as the chorus becomes easy to sing-along with. The band pay homage to one of their favorite jambands with “I Fell In Love With The Grateful Dead,” they return with the solemn sounding “Mary Austin Sky.” The band picks up the tempo with “Big Old Hypodermic Needle” and “Hunger Mountain Breakdown” as once again they lighten-up the subjects of drugs and suicide. The album closes with the heartfelt ballad “If You Lead I Will Follow” as we all need that feeling of help once an awhile.

I See Hawks In L.A. will be out on the road, performing at a handful of festivals in May. Please visit the band’s website (iseehawks.com) for a list of tour dates and information on the new album “New Kind Of Lonely.”
Posted by JP's Music Blog