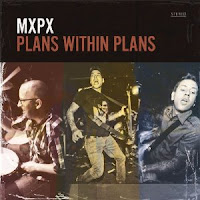 Punk band MXPX are celebrating their 20th anniversary this year with a brand-new album entitled “Plans Within Plans.” The album contains 13 songs about the triumphs and tribulations that the band has gone through in the last 20 years. The new album will be released on April 3 through the MRI/Rock City Recording Company.

The punk power of MXPX is never duplicated, but often imitated. As soon as the drums and guitar of the opening song “Aces Up” hit the speakers, you know you’re in for thirty minutes of energetic splendor. The shortest song on the album is the one-minute masterpiece “Screw Lose” which is exactly how we all feel at one time or another. But, the energy just keeps coming with “Nothing Left” and “Best Of Times.” The lyrics of “Lucky Guy,” “Cast Down My Heart” and “When It Comes To You” is like a trilogy of love loss and rising again to the challenges of everyday life. The album closes with the rebellious “Nothing’s Gonna Change” which calls to you to get up and change the world for the better.

MXPX are spending the month of April overseas, but watch their website (mxpx.com) for more live dates to be announced. The band currently have a video for the album’s first single “Far Away” and are currently taking pre-orders for their new album “Plans Within Plans.”
Posted by JP's Music Blog