CD Review: Riviera Keeps An Eye On "The Western Skies" 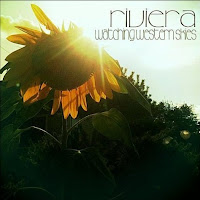 Originally from Chicago, the band Riviera is releasing their first batch of new music in six years. The new EP is entitled “Watching The Western Skies” and features some of the best songs this band has to offer. The music on this new release is country-folk-rock with traces of Wilco throughout.

The EP begins with “Hopeless”, which sounds like the slow jaunt of a Neil Young ballad, but it’s the lyrics that wrap you up as you listen closer on each play of the song. Their country side comes shining through on “Sweet By & By” and “Destiny,” before the band turns Americana with “The Grizzly Killers of Wassilla.” The album closes with the aptly titled “The Last Walk,” which is the folk-rock sound that Riviera is known for.

The band has recently opened for Jeff Tweedy, Son Volt, and Jarret Johnson amongst others. They currently have no shows on their schedule, but keep an eye on their website (Riviera-sound.com) for upcoming shows.
Posted by JP's Music Blog