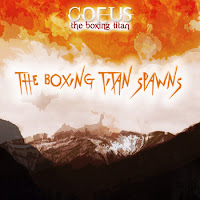 Industrial rock band Coeus The Boxing Titan are getting ready to release their first digital album entitled “The Boxing Titan Spawns.” The band combined the sounds of Pink Floyd, Faith No More, King Crimson and Nine Inch Nails in a blender, turned it on high and out came this new album. It is a very exploratory album with soundscapes to expand the mind.

The lead-off song “Tension on Cloudland” uses a very steady drumbeat to keep time, while the vocals are almost read through a megaphone to give it a distorted sound. The shrieks of guitars break-up the mono-tone of the song. The song “Like Vegas” sounds as if Prince collaborated with Trent Reznor, while “God’s In A Lab In California” shows-off their more industrial side. Their love for progressive sounding rock is hear in the solos of “My Asylum,” before the band’s sound changes in “This Bomb’s Like A Clock Tick, which sounds like a beat-filled, futuristic sounding Grateful Dead song. The album closes with the seven-and-half minute epic “February, This Is For You” that echoes eerie sounds which would fit perfectly into a modern day horror movie.

For more information on Coeus The Boxing Titan, check out their website at coeustheboxingtitan.com.
Posted by JP's Music Blog